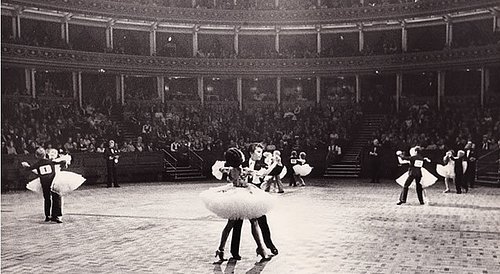 After a couple of years and several partners, Ian teamed up with Carol Dixon and were fortunate in being accepted to be trained in Standard by former World Champions, Brenda Winslade and Peter Eggleton. Ian formed a close bond with Brenda: she was the motivation and driving force behind their success. Ian's Latin trainer was the incomparable Robert O' Hara, who was a brilliant technician and former International Champion. Ian and Carol had a very successful career, competing extensively in England and Europe.

Since turning professional in 1989, Ian has successfully passed Associate and Licentiate degrees in both Standard and Latin American dancing with the Imperial Society of Teachers of Dancing, gaining rare Highly Commended distinctions in both divisions. In December 1998, Ian became a Fellow of the ISTD. This prestigious degree is the highest degree in dance that can be attained with a professional teaching society. The ISTD is regarded as the world's leading professional teaching society, holding rigorous examinations for professional teachers. . Ian is a member of the US branch of the ISTD, having written several technical articles for their magazine. Moreover, Ian was elected as a one of the National Committee members of the Executive Board for the society and was appointed Collegiate Assessment Program Director. He retired from that position in September 2003. Ian is also qualified in American Style dancing holding a membership degree with the North American Dance Teachers Association. Ian also has nine degrees with DVIDA (Dance Vision International Dance Association) in all four styles. He was appointed an exmainer for the Society in November of 2008.

Ian's professional career included  a successful partnership with Wendi Davies and they were regular Standard finalists.  He retired from competing professionally in March of 2000 to concentrate on teaching, coaching and competing in pro-am events.

Ian is a former faculty member and coach of the George Washington University Ballroom Dancing Program in Washington, DC. He is a highly respected  teacher, coach, and choreographer. Ian is known for his in depth technical knowledge gained over 28 years of top class experience.  His couples have been successful at National Championship level. He also lectures, is a licensed Championship adjudicator and is available for professional examination training. He has won various top teacher awards.

On the 5th May 2002, Ian was honored to receive the ICADC Professional Honoree of the Year. This was a unanimous decision by the awards committee and the citation read "in recognition of an outstanding dance professional, for his years of unselfish devoted and loyal services to the dance profession, we honor and thank you".

In November 2008, Ian was delighted to be appointed Regional Examiner for Pro DVIDA (Dance Vision International Dance teachers Association). He relishes the opportunity to train as well as examine candidates for their professional degrees. He also takes a great deal of pride in being able to help shape the future technique of Ballroom Dancing.

The 17th of December 2019 marked a milestone for Ian: he celebrated his 30th year since turning professional and successfully passing his first dance degree. Many things change over the years, but Ian's commitment to excellence does not.

It was Ian's avid interest in movement that led him to persuade his parents to take him to a Ballroom dancing school when he was approximately 7 years old. From children's classes he progressed to private lessons and quickly started to compete, as well as becoming a member of the successful formation team (which was featured on national television). Ian also took many amateur medal tests advancing to a very high level with the International Dance Teachers Association, passing all with honors.